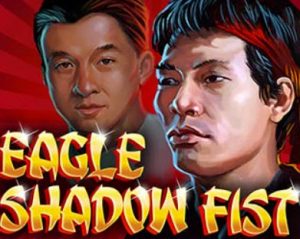 Eagle Shadow Fist Slot is an online slot machine developed by real time gaming and it is made up of five reels and twenty five lines. The maximum payout is twenty five thousand dollars. Minimum bet is 0.25 dollars and the maximum is 25 dollars.

Real time gaming has developed another slot machine that is called Eagle Shadow Fist and it is an Asian movie themed game. The title of the game can be ascribed to a movie with Jackie Chan as the main character titled eagle shadow fist. The action took place during World War II when he was against Japanese invaders. It is made up of five wheels and contain twenty five lines. Players can end of going away with as much as twenty thousand dollars. Also, there is progressive jackpot that also increase the winnings of the players. There are other features and symbols that affect players’ winnings such as wilds, scatters, free spin session, and multipliers.

Players are provided with twenty five lines for them to bet on with the minimum amount that can be wagered being 0.25 dollars and the maximum amount is twenty five dollars. You can go as far as one dollar when it comes to value of coins.

Another icon that is worth mentioning is the scatter icon which will activate the free spins session when at least three of them can be seen on the wheel. Also, the game will be conclude with a battle between the hero and the villain of the movie in which you will be given twenty free spins and extra times two multiplier. Combining this multiplier with the one obtained from the wild will give the player a total of times four multiplier.

The theme of this slot is about a Chinese movie in 1973 that was titled eagle shadow fist just like the name of this slot machine. The main character in this movie is Jackie Chan and he is showcased on the wheels together with those he fought agiainst. The wheels are fantastically designed showcasing things that can be linked to the film like the person Jackie Chan was fighting against. The wheels also contain low paying symbols as well as high paying ones such as the wilds and scatters.

Eagle Shadow Fist Slot is worth trying out coupled with the fact that real time gaming are notable for developing quality slot machines. Also, the game can be played by every caliber of players and it has a decent payout. There are some icons that contribute to the winning of the players when landed and some also give multipliers.

The main things to be known by players before playing Eagle Shadow Fist Slot include?

The provider of the game is Real Time Gaming and it has twenty five bet lines. The maximum payout is twenty five thousand dollars. Minimum bet is 0.25 dollars and the maximum is 25 dollars. It contain five wheels and contain symbols that contribute to the winning.