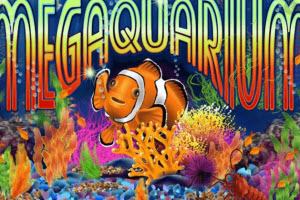 Megaquarium Slot is an online slot game with real time gaming as its software developer. It is made up of five by three wheels and fixed fifty bet lines. It has a return to player of 96.80 percent and a maximum payout of twelve thousand and five hundred dollars.

Real time gaming has developed another slot machine that is known as Megaquarium. From its name it is obvious that the theme of the game will be related to aquarium. However, all the actions are carried out on the wheels and the design was done to depict an aquarium. Megaquarium is made up if five by three wheels and fifty fixed bet lines. It also has a high cash out of about twelve thousand and five hundred dollars. The payouts can be obtained with the activation of winning icons such as wilds, scatters and so on.

Players can select the pay line to bet on out of fifty available lines. The least amount that can be staked per spin is 0.50 dollars whereas the maximum is 12.50 dollars. 0.01 dollars to 0.25 dollars is the variation among the lines. With the wild icons, players can have about ten thousand times their bet which will amount to two thousand and five hundred dollars. When the free spin session is on the players will be given multipliers of times five. This will make the players to have about twelve thousand and five hundred dollars. The slot also offer players jackpot from which they can cash out big time.

Among the winning icons is the wild which is represented with a clown fish. It can also substitute for other icons on the wheel. However, it only showcase on wheel two or four and triggering the feature will multiply players winnings by two.

The free spins session is activated with the help of the logo of free games. Players will be awarded up to seven spins for free. However, to activate this feature the logo must be on wheel one and five concurrently. Also, the winnings of the players will be multiplied by two during this session. On the seventh free spins, bonus games icons will be added to wheels one, two, and three. The session can be reactivated by the presence of all 3 icons on the 3 wheels mentioned above when you are on your seventh spin. Players will be awarded extra three free spins when the fifth wheel only contain wild. During this session players can have a multiplier of times two up to one hundred times their wagers.

In the super games session players have an option of playing three rounds without no charge. Then players will be awarded times five of their winnings and after spinning for the thirteenth time the wheels will contain the logo of mega games. At the end the player will still have additional three free spins. Per round players will be awarded about five hundred times their stakes.

There are lot of amazing icons on the wheels and the game is themed ocean-like. Some of the icons include wilds, scatters, fishes, oceans, and so on. The free spins session and the bonus games session are activated with the help of these icons.

Megaquarium Slot is worth trying out with the developer being real time gaming, a reputable software provider in the gaming industry.

The main things to be known by players before playing Fucanglong slot include?

The provider of the game is Real Time Gaming and it has a payout percentage of 96.80 percent. The maximum payout is twelve thousand and five hundred dollars. It contain five wheels and many winning icons.

Which casino has Fucanglong slot?

Yes, the game is also available in demo mode in which players can play it for free without using real money.