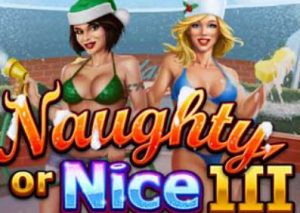 Naughty Or Nice III Slot is an online slot developed by real time gaming and it is made up of five reels together with thirty lines. The maximum payout is twelve thousand and five hundred dollars. Minimum bet is 0.30 dollars and 7.50 dollars.

About Naughty Or Nice III Slot

Real Time Gaming has launched another slot game that is called Naughty or Nice III and it is a festive themed game. It is a game that is developed for those people that are anticipating Christmas. It is made up of five wheels and contain thirty bet lines. There are two sessions possible to be activated by the players. Also, there are some icons and features that contribute to winnings of the players include wild, scatter, and free spins session. The highest amount players can get from the slot is fifty thousand times the stake amounting up to twelve thousand and five hundred dollars.

The range of betting is from 0.01 dollars to 0.25 dollars. Players are provided with thirty lines on which they can placed their bets. The least amount that can be staked is 0.30 dollars whereas the maximum amount is 7.50 dollars per spin. This game is not meant for receiving high payout and does not contain progressive jackpot. The highest winning combinations players can have is five hundred coins which amount to one hundred and twenty-five dollars. The maximum payout is fifty thousand times the stake which can be up to twelve thousand and five hundred dollars.

Among the icons that contribute to the winnings of the players is the wild which is represented by the two girls on the wheels. Each one of them is the wild icons and they showcase on different wheels. On wheels one and two, naughty girl will be found whereas the second wild known as the Nice Girl will be on wheels four and five. Both of the wilds can act as a replacement for other icons present on the wheels except scatters.

The first wild will showcase on the first wheel and can act as wild as well as a scatter. The second wild will be on wheel 5 or can cover both the fourth and fifth wheels.

The theme of the game is about the festive period in which some people are expecting the coming of Christmas festival. It also contain Santa but the main character are two girls with one being a naughty girl whereas the other is a nice girl. There are lot of icons that are designed on the wheel and it include the logo of the game, Mrs. Santa, and so on.

Naughty or Nice III Slot is worth trying out coupled with the fact that real time gaming are notable for developing quality slot machines. Also, the game can be played by every caliber of players and it has a decent payout. There are some icons that contribute to the winning of the players when landed and some also give multipliers.

The main things to be known by players before playing Naughty or Nice III Slot include?

The provider of the game is Real Time Gaming and it contain thirty lines. The maximum payout is twelve thousand and five hundred dollars. Minimum bet is 0.30 dollars and 7.50 dollars.