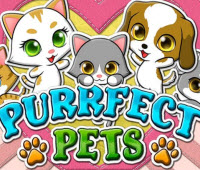 Purrfect Pets Slot is an online slot developed by Real Time Gaming and it is made up of five reels together with twenty-five lines. The maximum payout is two thousand and five hundred. Minimum bet is 0.25 dollars and the maximum is 6.25 dollars.

Real Time Gaming has launched another slot machine called Purrfect Pets and from the name of the game it is obvious the theme will be that of pets. The graphics are of cartoon and they are amazing although it may not be up to that of some games. It is made up of five wheels and contain twenty-fine paylines. Players can get up to two thousand and five hundred dollars for playing in one spin. Some of the features and characters available in this game include the wild, scatter, multiplier, and free spin session.

There are twenty-five lines available for players to place their bet which means that the players have the power to adjust the line to their taste. The minimum amount a player can stake is 0.25 dollars and the maximum is 6.25 dollars. The range of values can be from 0.01 dollars to 0.25 dollars. The game also has progressive jackpot in which the players can get up to one thousand two hundred and fifty dollars. Also, when the free spins session has been activated players can achieve a payout of two thousand and five hundred dollars. The return to player of the game is 97 percent which implies that players have high chance of winning.

In this game the main character which is the purrfect pets represent the wild icons and they can replace any other icons on the wheels. Players can form winning combination when the wild combine with a regular symbol. The landing of the wild cat at the expected position and combining together to give players up to five thousand coins. However, the wild cannot replace the scatter. The scatter is another icon that is present in the game which activate the free spins session. Dog is used in representing it the players will be rewarded based on the number of scatters they are able to land. Having at least three of the scatter icons will give players up to two hundred times their stake. Once the free spin session has been activated the players will be awarded ten free spins. Also, the winnings of the players in this session will be multiplied by two. The scatter icon turns additional wild during this session and the session can be reactivated by the presence of at least three dogs or cats. If at least three wilds are landed the players will be awarded ten free spins and three times multipliers to increase their winnings. This feature can be reactivated when the players have landed at least three cats.

Purrfect Pets slot is designed with a lot of icons that indicate the theme of the game to be about pets. Among the icons you will found on the wheels include the cat which is the wild and the dog which is the scatter. Other icons include the food of the pets, bone, collar, and so on. It has an amazing graphics and theme also.

Purrfect Pets Slot is worth trying out coupled with the fact that real time gaming are notable for developing quality slot machines. Also, the game can be played by every caliber of players and it has a decent payout. There are some icons that contribute to the winning of the players when landed and some also give multipliers.

The provider of the game is Real Time Gaming and it contain twenty-five bet lines. The maximum payout is two thousand and five hundred. Minimum bet is 0.25 dollars and the maximum is 6.25 dollars. It contain five wheels and has a return to player of 97 percent.

Which casino has the Slot?

Can I play for free?