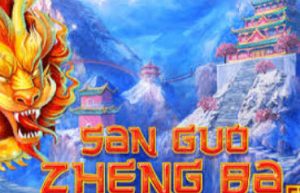 San Guo Zheng Ba Slot is an online slot that has Real Time Gaming as its software provider and it is made up of five reels together with fifty bet lines. The maximum payout is fifty thousand coins.

It is made up of five wheels and fifty bet lines from which players will stake on to win. The payout the players can obtained from such game is fifty thousand coins. Additionally, there are lot of icons that contribute to the winnings of the players. Such icons include the wild, scatter, and free spins session during which the players can obtain multipliers. Also, the wild can expand and cover the entire wheel therefore becoming sticky wild.

There are fifty bet lines provided for players to stake their money on with the minimum wager being 0.50 dollars. The players can adjust the number of bet and the values of money as they wish. The highest amount players can go away with is fifty thousand coins if you utilized all the chances available. Apart from that, the players can still benefit from the multipliers that will help in multiplying your winnings.

San Guo Zheng Ba Slot is an amazing game from real time gaming that contain a lot of opportunities for players to have high payouts. One of the icon that provide the players with opportunities is the wild that is represented by a dragon. It helps in forming winning combinations however, it only showcase on wheel three at the beginning.

Another icon worth mentioning is the scatters that activate the free spins session due to the presence of a minimum of three scatter icons on the wheels. The scatter is represented by the emperor and will give players five free spins. The players will obtained sticky wilds on wheel three, four, and five. The wild will also contribute by giving winnings a two times multiplier therefore increasing the cash out. After the free spin session the players will be directed to the super spins session. This session can be played three times and among the things the players will be privy to five times multipliers, wild wheels, and extra super spins session.

San Guo Zheng Ba Slot contain amazing graphics, designs and the theme of the game is about an emperor that was on the verge of being dethroned. There are lot of icons on the wheels that depict the old era in the Chinese history. Among the icons include the wild, scatter, empress and so on.

San Guo Zheng Ba Slot is worth trying out coupled with the fact that real time gaming are notable for developing quality slot machines. Also, the game can be played by every caliber of players and it has a decent payout. There are some icons that contribute to the winning of the players when landed and some also give multipliers.

The provider of the game is Real Time Gaming and it have fifty bet lines together with five reels. The maximum amount that can be obtained from the slot is fifty thousand coins.

Is the slot compatible with mobile devices?

Can I play San Guo Zheng Ba Slot for free?