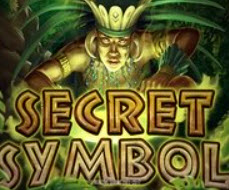 Secret Symbol Slot is an online slot that has Real Time Gaming as its software provider. It is made up of five reels, twenty-five bet lines and the maximum payout is fifty thousand dollars. Minimum bet is 0.25 dollars whereas the maximum is 6.25 dollars.

Real Time Gaming have developed another slot machine that is called Secret Symbol. The majority of the icons present in this game can be traced back to the old Aztec era. The game is made up of five wheels and twenty-five bet lines. Players can cash out as much as fifty thousand dollars which is a big cash out. There are winning icons in this game also such as wilds, scatters, and free spins session during which the players can obtain multipliers of twenty times. Also, the wild can expand and cover the entire wheel.

There are twenty-five bet lines available to the players to place their bet on. The least amount that can be wagered is 0.25 dollars whereas the maximum amount is 6.25 dollars. 0.01 dollars to 0.25 dollars is the variation between the bet lines. In this game players can cash out a very huge winning. From the beginning of the game the player could have been awarded ten thousand times the stake just for landing some icons. This can amount up to two thousand and five hundred dollars. With the free spins session being activated the players can eventually leave with as much as fifty thousand dollars. The game also include two jackpots which provide opportunities to players to cash out big. We have the small and large jackpot and they are activated randomly.

There are icons that contribute to the winnings of the players and among them is the Aztec Chief that can give them up to ten thousand times their stakes. It is also known as the wild icon and can substitute for all other icons on the wheels. Another icon that increase the winnings of the players is the scatter that is represented by a pyramid. When this feature is activated players can go away with as much as five hundred times their stakes. To activate this feature the players need to obtain five icons of such on the wheels. There is a free spin session which will be activated by obtained more than three scatter icons. Players will be given ten spins for free and the wild will cover the entire wheels two and four. The players can receive multiplier as small as times two and up to twenty times. The multipliers will be applicable to all the winnings accumulated during this session.

The graphics and designs of Secret Symbol Slot are amazing with icons designed to depict the old Aztec era on the wheels. There are lot of slot games that were inspired by the theme of this game. There are lot of icons you are going to see on the wheels and among them are priest, pot, snake, Aztec chief, necklace, Aztec pyramid, and so on.

Secret Symbol Slot is worth trying out coupled with the fact that real time gaming are notable for developing quality slot machines. Also, the game can be played by every caliber of players and it has a big payout.

The main things to be known by players before playing Secret Symbol Slot include?

The provider of the game is Real Time Gaming and it has a payout percentage of 95 percent. The maximum payout is fifty thousand dollars. Minimum bet is 0.25 dollars whereas the maximum is 6.25 dollars. It contain five wheels and many winning icons.

Which casino has Secret Symbol Slot?