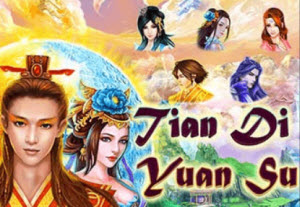 Tian Di Yuan Slot is an online slot that has Real Time Gaming as its software developer. It is made up of five reels and thirty bet lines. The minimum bet is 0.30 dollars and the maximum payout is up to fifty thousand dollars.

Real Time Gaming has developed another slot machine that is called Tian Di Yuan Su. From the name of the slot it is obvious that the theme of the game will be about Chinese elements. The main elements in this game are the moon and the sun. It is made up of five wheels and possesses thirty bet lines. The maximum amount that can be obtained from the slot is fifty thousand times the stake. Additionally, there are lot of icons that contribute to the winnings of the players. Such icons include the wild, scatter, and free spins icon.

Thirty bet lines has been provided for the players to stake on. The minimum amount you can stake on each line is 0.30 dollars per spin. The slot also contain jackpot just like some of the slots from real time gaming. Players can win up to fifty thousand dollars and there are additional means of increasing your payout. During the free spin session you can also obtained multipliers that will increase your winnings.

Among the icons that contribute to the winning of the player is the wild and it is represented by the sun. It is capable of replacing other icons on the wheels except scatter and only showcase in some particular places on the wheels. Also, it also serves as a multiplier in which your winnings will be multiplied by two.

The other icon worth mentioning is the scatter icon which is represented by the moon and it also contributes to players winning. This feature is activated by the presence of at least 3 of the scatter icons on the wheels. The free spin session will take place as a result of the scatters and players get to decide the number of times and multipliers. At most the player can obtained about thirty-three free spins whereas the multiplier can be up to times fifteen. The minimum amount of free spins the player can have is eight and the multipliers will be times two which is amazing. Landing the scatters again can reactivate the session and players will provided with extra fifteen free spins.

The slot has an amazing graphics, designs, and theme which is based on Asian elements. The wheel is designed with the five elements being represented on it. They include earth, wood, fire, metal, and water. There are some icons that contribute to the winning also such as the moon and the sun which are part of the high paying icons. Other icons present are those of lower values and are present on the wheels.

Stardust Slot is worth trying out coupled with the fact that real time gaming are notable for developing quality slot machines. Also, the game can be played by every caliber of players and it has a decent payout. There are some icons that contribute to the winning of the players when landed and some also give multipliers.

The main things to be known by players before playing Tian Di Yuan Slot include?

The provider of the game is Real Time Gaming and it have thirty bet lines. The maximum amount that can be obtained from the slot is fifty thousand times the stake.

Can I play Tian Di Yuan Slot for free?